The new restaurant appears as a fine wine bar. The fashionably wine-centric restaurant has 88 seats and bar is designed by David Rockwell while menu is completed by the Executive Chef Joel Dennis and Wine Director Thomas Combescot. The service is famously polished, friendly, and less studied than in the old place.

Thanks to perfect restaurant with perfect food, Daniel restaurant was voted as one of world’s best restaurant. The place provides French cuisine

Le Bernardin, which is co-owned by Maguy LeCoze and Chef Eric Ripert, is well-known for its seafood and other impeccable, exquisite food

4-star restaurant Jean Georgesm, which is located at the Trump international hotel, offers all kinds of traditional cuisine 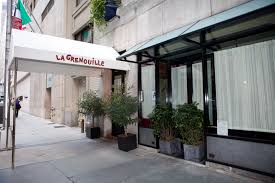 La Grenouille is one of the city’s few remaining grandest and oldest classic French restaurant. The Midtown space is famous for amazing flower arrangement and friendly staff

Paige Taylor is interested in traveling. She loves to write about beautiful destinations and tourism events